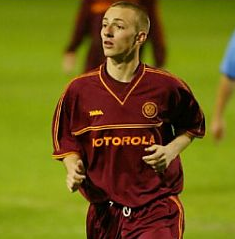 Midfielder, Shaun Fagan progressed through the Motherwell youth system. It was manager Eric Black who gave the youngster his first team debut in the closing months of the 2001/02 season when he came on as a late substitute in a 4-0 defeat against Hibernian at Easter Road.

Shaun was with the club when it went through one of its most turbulent periods in history when in April 2002 it was placed into administration. Despite many team mates being made redundant a number of youth players would profit playing wise as the side operated with a threadbare squad. Fagan alongside the likes of Dougie Ramsay, David Clarkson, Stephen Pearson and James McFadden to name a few were all youth graduates that now were all counted upon to drive the club forward.

Despite enjoying more first team openings, Shaun was more or less a squad player during his time at Fir Park as he made 84 first team appearances in all competitions 40 of these came as a substitute.

He certainly made a good impression on the 10th September 2002 when a young ‘Well side took on Celtic, a game which was shown live on the BBC, coming off the bench late in the game, shaun managed to score with a diving header in a fine 2-1 victory. Sadly however in the reverse fixture at Celtic Park he would go from the hero to villain as he was sent off for punching the ball into the net when a cross was just to high to meet with the open goal gaping.

Shaun was a player who didn’t score often but in the three times he did the side won all their matches, Celtic (2-1), Hibernian (2-1) and Falkirk (5-0). During the 2002/03 season he featured in every round on route to the Scottish Cup Semi Final against Rangers but a nasty injury put paid to any chances he had of playing in the showpiece fixture at Hampden.

In December 2006, he was farmed out on loan for a few months to Stenhousemuir but at the end of the season was released. Going forward he never really settled at any of his future employers as he would represent Irish outfit Galway United, Stirling Albion (twice), Clyde and East Fife.

While in his second spell at Stirling Albion he was assistant manager to Greig McDonald. Due to Mr McDonald’s wedding coinciding with a fixture over Rangers, Shaun would temporarily take the reigns and in the process he famously guided the Bino’s to 1-0 victory.

Capped by Scotland at U21 level in 2004, Shaun would later turn out in Junior football with St Roch’s.