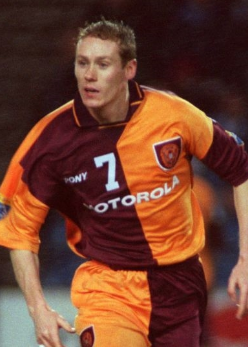 John Hendry signed for Motherwell in 1995 for a fee of £200,000 from Tottenham Hotspur. The forward had started his career with Dundee but despite only making a handful of appearances at Dens Park, a fruitful loan spell was spent at Forfar Athletic where he enjoyed a scoring spree. Soon there after, Spurs managed to temp him to White Hart Lane in 1990 for a fee of £50,000.

Hendry was more or less a fringe player in England, he did enjoy partnering the likes of Gary Lineker in the Tottenham attack on occasion, he even scored in a 1-1 draw against Manchester United at Old Trafford but he failed to cement a first team berth.

When Alex McLeish added him to the Motherwell squad it was hoped that he was the first of many quality players to be signed from a higher standard. John made his ‘Well debut as a substitute in a 2-1 win over Aberdeen in October 1995, this was followed up by scoring a double against Hibernian a week later but the side however fell to a disappointing 2-4 defeat, these goals of course would be his only two of the season and in actual fact Hendry would only find the back of the net once more for the club with this coming just over two years later against St Johnstone in a 3-4 defeat.

John Hendry is proof that having a big club on your CV does not guarantee good performances in the future. He left Fir Park having failed to make the expected impression due to lack of form and fitness, his fall from grace was indeed a swift one. When he departed Motherwell in 1998 he would a brief spell with John Philliben’s Stirling Albion side before dropping into junior football.