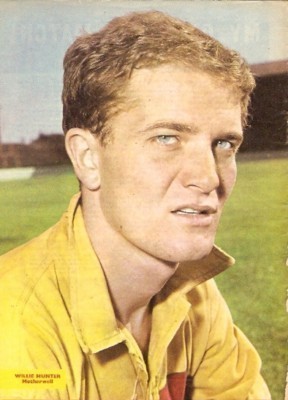 Willie Hunter arrived at Fir Park in 1957 when manager Bobby Ancell signed him from Edinburgh Norton. He would become an integral part of the ‘Ancell Babes’ with the manager himself paying him the ultimate compliment by describing him as the most skilful of the bunch, it’s all the more impressive when you think of the talents of Pat Quinn, Ian St John, Andy Weir and Bert McCann were all part of the team at this time.

His early Motherwell career would often see him feature as a winger but upon the departure of Pat Quinn, Willie would slip into the role of inside left. Hunter’s early form was so good that many people often compared him to Hibernian’s famous five member, Gordon Smith.

Willie was a determined footballer and an excellent ball player, he proved to be a real handful for opposition defenders as he could seemingly just breeze past them evading sliding challenges at all angles. He scored 64 goals for the club in all competitions but he most certainly set far more up for team mates than he scored himself.

During the 1959/60 season, Willie was the club’s top scorer netting 34 goals during the season, the following campaign he was part of a side that recorded one of those great results that will remain in the clubs folklore forever, this of course was the Scottish Cup replay versus Rangers where the Steelmen were 1-2 down and fought back to secure an astonishing 5-2 win that swiftly cleared out Ibrox.

He had been clearly enjoying his football at this stage but a number of injuries would arise which would hamper his first team involvement, in 1962 he broke his arm and when he returned he was unfortunate in that he broke it again. After suffering a leg break he didn’t seem like the player he was.

In 1967 he joined Detroit Cougars for a fee of £14,000, they were a new club setup in the NASL in America but the side would only last one season, upon his return to Scotland he joined Hibernian. His appearances were limited at Easter Road as former team mate Pat Quinn had nailed down the inside forward berth. He was listed as a substitute in the 1968/69 League Cup Final but the Hibee’s crashed to a 6-2 defeat against Celtic. Interestingly enough the Hibernian side had a number of past and future ‘Well connections in their lineup which included the aforementioned Quinn, Peter Marinello and Jimmy O’Rourke.

Hunter moved to South Africa in 1971 joining Hellenic then moving to Cape Town City, he linked up with former team mate Ian St John, winning a league title in 1973.

While at Fir Park, Willie did enjoy some international recognition in 1960 as he won three Scotland caps, in the first he scored in a 3-3 draw vs Hungary, the second and third caps were won against Turkey (2-4) and Wales (0-2) both of which ended in defeat.

Willie would link up with St John again as he became his assistant manager at Motherwell. He would try his hand at management as well having a spell with Queen of the South and Highland League side Caledonian FC.

Willie Hunter is a player who is fondly remembered by the Motherwell fanbase of a certain vintage.