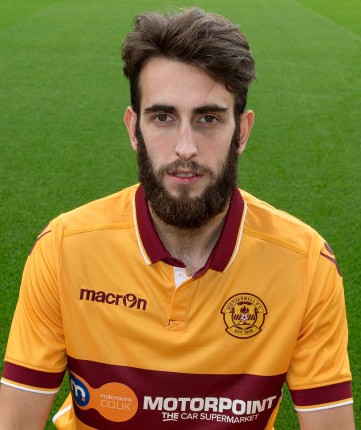 Tall gangly defender who was adept at playing at centre back or occasionally at right back. Kieran Kennedy had begun his career with Manchester City where he had been in the academy from 2000 to 2014, despite being a highly rated prospect he was unable to break into the first team having become a regular with the Sky Blues Elite Development Squad, Kennedy of course had the misfortune of being at the club at a time when millions were being spent on there playing squad, with the door at the Etihad Stadium being firmly shut he tried his hand with Leicester City on loan before joining on a permanent basis, again the young defender couldn’t break into the first team before being released.

Kieran initially joined Motherwell during a pre-season training camp in the Netherlands in July 2015, he impressed boss Ian Baraclough sufficiently in two games he featured in against Heerenveen and Borussia Monchengladbach, Kennedy signed a two year deal with the club who had to fend off stiff competition from Southend United who were also after his signature.

The young Englishman made his first team debut on the 25th August 2015 in a 3-1 win over East Fife in a League Cup time, a game which was taken into extra time. He would follow this up by making his league bow only four days later in a fine 1-0 win against Kilmarnock at Rugby Park.

His first season playing senior football provided a mixed bag as the club would struggle in the first half of the season as a relegation fight looked like it was on the cards for a second consecutive season, Kieran essentially gave everything you would expect in a young raw defender, his consistency was the main issue as he was guilty of making some erratic decisions

Kieran provided every thing that you would expect in a young raw defender, consistency was the main issue as at times he was guilty of making some erratic decisions, on one hand he put in a horror show in a 3-0 defeat against Ross County and on the other he put in a solid showing against Celtic, essentially the management preferred to use Stephen McManus as the main centre back with Kennedy or Louis Laing battling for the other vacant position, when young Ben Hall emerged from the youth setup, new ‘Well gaffer Mark McGhee opted to play the young Northern Irishman instead. 2015/16  ended with a 5th place league finish and Kieran made a decent contribution in 25 first team appearances.

The following season it was said that he had suffered a bad illness and he would miss the start of the season, eventually it was reported he was suffering from an undisclosed injury, he seemed to completely vanish from the scene until on the 23rd March 2017 it was revealed that he had been released by the club and that he would return to England to join National League North side AFC Fylde in the semi-professional ranks.

Kierans grandfather Paddy Kennedy was also a footballer, the full back was part of the Busby Babes who won the FA Youth Cup in 1953 with Manchester United, he would go on to serve Blackburn Rovers, Southampton and Oldham Athletic but Paddy only featured in a nominal amount of first team games despite having an impressive array of clubs on his CV.