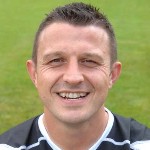 Born in Kilmarnock, it was indeed his hometown club he would start his career with. Colin was on the Kilmarnock books for eleven years but most of his stay at Rugby Park saw him as back up to the likes of Dragoje Lekovic, Gordon Marshall, Alan Combe and former ‘Well keeper Francois Dubordeau. After spending over a decade in Ayrshire he would only make just over 80 first team appearances.

Prior to signing for Motherwell, Colin had made two appearances for Forfar Athletic. He was invited to train with the club and after Gordon Marshall was ruled out by injury at the beginning of the 2005/06 season, Terry Butcher was quick to offer Meldrum a deal to join the club. He would battle it out with Graeme Smith for the number 1 slot, but more often than not Colin found himself as back up, he made his debut in a quite spectacular match as ‘well were beaten 5-4 to Dundee United at Fir Park. Certainly didn’t give the expected impression for a keeper making their debut. It was during the 2006/07 season where he enjoyed an extended run in the side, Manager Maurice Malpas made Colin the new Number 1 after Smith had a poor performance against Inverness, he would go on to play 18 first team games as the side struggled throughout the campaign. Perhaps a moment to forget, with two games of the season to go and with the threat of relegation still a distinct possibility, Colin made a huge error in the game against fellow strugglers St Mirren, the ‘Well were strolling 2-0 before a tame John Sutton header slipped through Meldrum’s legs and rolled into the net, the buddies rallied back and won 3-2. He would play the final game of the season in a 0-0 draw against Dundee United before hanging up his boots.

He was offered the role of Goalkeeping Coach and was part of Mark McGhees management team at Fir Park. He would follow McGhee to Aberdeen in 2009 and he replaced Dons legend Jim Leighton as GK coach.