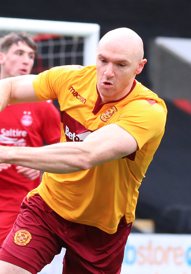 Irish forward Conor Sammon arrived at Fir Park at the beginning of the 2018/19 season on loan from Hearts. No stranger to Scottish football as he had also represented Kilmarnock and Partick Thistle, he would add a different option to the ‘Well attack which already contained Curtis Main, Ryan Bowman and Danny Johnson.

Conor had been a proven goalscorer in Scotland, he won a great move to Wigan Athletic in the English Premiership after a fruitful spell at Rugby Park. At the DW Stadium he played under former Motherwell midfielder Roberto Martinez who was the manager of the Latics. Throughout his career he was sold for some big fees, Derby County purchased him for £1.2 million, Sammon managed to forge a good career in England having also represented Ipswich Town, Rotherham United and Sheffield United on loan before he headed back to Scotland.

At Tynecastle he struggled to fit into things as managerial changes seen many players come and go for the Jambos and he spent subsequent loans, firstly making a return to Kilmarnock and then heading to Partick. At Firhill he would suffer relegation via the playoffs, Conor of course missed a crucial late penalty in the game.

His arrival at Fir Park wasn’t met by much fanfare perhaps due to his last few years in Scottish football where he hadn’t really set the heather on fire. The forward had won 9 full international caps for Republic of Ireland and his CV did list numerous big clubs.

A tall striker who is good with the ball at his feet and deceptively fast, he found himself down the pecking order at Fir Park. Sammon made his ‘Well debut in a League Cup group stage tie versus Edinburgh City, he would score a double a week later in a 2-0 win over Queen of the South.

He failed to score in the any Scottish Premiership fixtures he played in with the club with all three of his goals coming in the league cup competition. At the end of the season upon his return to Tynecastle he was released and would eventually sign for League One side Falkirk.