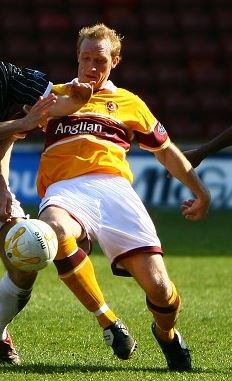 Paul Keegan joined Motherwell at the tail end of the January 2007 transfer window. Maurice Malpas obviously liked his players from the Irish league as he was part of a trio joining the club at the same time. Paul along with Trevor Molloy came from St Patricks Athletic for an undisclosed fee, and highly rated full back Danny Murphy came from Cork City on a free.

Within days of arriving in Lanarkshire, Paul made his debut as he was a substitute in the 1-0 defeat at the hands of Rangers at Fir Park. Seemingly he had a lot to offer as he had an excellent pedigree in the game being successful in both MLS in the United States (Where he would be the first Irish man to ply his trade there) and also in the Irish Leagues.

Paul would struggle to make an impact at Fir Park, this probably down to him being in the veteran stages of his career and the demands of the SPL seemed just too much for the 34 year old. As the new management regime of Mark McGhee and Scott Leitch were now appointed in the summer of 2007, it was made pretty clear Paul wasn’t in their plans and he was allowed to leave and leave and he subsequently joined First Division club Partick Thistle.

Keegan made ten first team appearances in claret and amber without netting and he left having failed to set heather on fire in his short spell. After leaving he served Partick Thistle, Dumbarton and Airdrie United. When he arrived in Scotland Paul and his family opened their own Domino’s Pizza franchise which was located in Paisley.