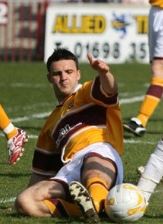 Small pint sized left back Danny Murphy joined the club in January 2007 coming direct from Eircom League Side Cork City. Manager Maurice Malpas was eager to sign Danny to replace the vacant slot left by Stevie Hammell as he departed to join English Championship side Southend United, but as the August transfer deadline was drawing to a close, Motherwell’s cash offer was declined by Cork City’s chairman.

As Murphy was keen to come to the club he agreed on a pre contract agreement as his Cork contract was up in January which meant the club had to remain patient but ultimately got there man for no fee. He would officially join the club on 1st January 2007 and would go straight into the side to play Rangers on the 2nd, making his debut as a substitute in a 1-0 defeat.

Danny arrived alongside two other players from the Eircom League, Trevor Molloy and Paul Keegan both of whom came from St Patrick Athletic. He would make his first start in the Scottish Cup as the club met local rivals Airdrie United. The initial impression was good as he would put in a number of decent performances in his early games and he even scored a neat free kick up at Tannadice against Dundee United, but injury would ultimately cut his season short.

The trio of Irish men seemed to struggle at this level and when Mark McGhee took charge the following season it was clear they weren’t in his plans as Keegan and Molloy were quickly moved on. Danny did have a successful spell on loan at First Division Dunfermline Athletic but when McGhee resigned Stevie Hammell in January it pushed Danny further down the pecking order, in February 2008 he re-joined Cork City. Murphy would later enjoy winning the League of Ireland with Shamrock Rovers.

Danny had been capped for the Republic of Ireland U17s and the League of Ireland.