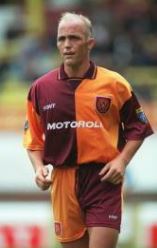 Brian Martin began his football career in Coatbridge with Albion Rovers before heading to Stenhousemuir and then dropping into Junior football with Shotts Bon Accord. He returned to senior football with Falkirk who he helped win promotion from Scotland’s second tier and followed this up with helping the Bairn’s maintain there place in the top division the following campaign.

In his early career he was clearly a journeyman as he went on to play for Hamilton Academical who he also enjoyed winning promotion with before arriving at St Mirren in 1988.

Tommy McLean was no stranger to dabbling in the transfer market but it did catch some people by surprise that he had paid out the handsome sum of £175,000 to secure the defenders services from Love Street, However it proved to be a fantastic piece of business for the club and being a case of money well spent on reflection.

Brian showed his qualities in defence, he didn’t possess great pace by any means but he did have exceptional reading of the game and was 100% committed to the cause, rarely was he ever beaten when it came to an aerial dual. Martin would spent seven years playing in claret and amber making well over 250 first team appearances.

At the age of 32, Brian made his full Scotland debut in 1995 playing back to back games against Ecuador and Japan in the Kirin Cup, his team mates Paul Lambert and Rob McKinnon were also in the squad. Around the same time period he managed to win three Scotland B caps.

His Motherwell debut was on the 16th November 1991 against St Johnstone, it is perhaps best forgotten as he would last little over twenty minutes when he was involved in an accidental collision with team mate Jim Griffin which resulted in Brian suffering a concussion, a chipped cheekbone and a massive black eye.

During his time with Motherwell he served three managers, Tommy McLean, Alex McLeish and Harri Kampman. Under the guidance of McLean the side was in a transitional phase which would ultimately reap the rewards of a tight defensive unit which consisted of the likes of John Philliben, Miodrag Krivokapic and Chris McCart.

During the mid 1990’s Brian was very consistent as not only did he help the club push for the Premier Division title in 1993/94 (eventually finished 3rd) but he helped an impressive attacking side under McLeish go one better the following season when they finished the league runners up.

A solid defender and a tremendous man marker his qualities truly shown through when he played against some real talent when Motherwell met Borussia Dortmund in the first leg of the UEFA Cup in Germany, a side which boasted the forward talents of Karl Heniz Reidle, Stephane Chapuisat and Andreas Moller, Martin put in a marvellous showing alongside his teammates and perhaps should have taken something from the match.

Brian would enjoy winning numerous personal awards, for two seasons in a row he was named the Supporters Player of the Year (1993/94 and 1994/95). Alongside Tommy Coyne and Rob McKinnon he was named in the 1994/95 ‘Team of the Season’, furthermore he was also nominated for the Players’ Player of the Year by the PFA with the other candidates being John Collins, Mark Hateley and Billy McKinley.

He was an immensely popular player at Fir Park, but well into his veteran stages he had to help the club fight many relegation battles at the talented side that was built by Tommy McLean had been broken apart and many close calls ensued at the wrong end of the league table. His departure from Fir Park was a sad affair as he spoke to a reporter off the record about new Finnish manager Harri Kampman’s training methods and poor signings. His comments were leaked to a newspaper which signalled the end to Brian Martin’s Motherwell career.

His former team mate John Philliben had departed the club at the end of the 1997/98 season to take the reigns of Stirling Albion, Brian alongside a number of ‘Well youngsters Garry Gow, David Bell and David McCallum all left to head to Forthbank. Experienced forward Ally Graham was also on the books which created quite the Motherwell connection.

Brian made a brief return to Fir Park in February 1999 when Motherwell met Stirling Albion in a Scottish Cup tie, the Steelmen would defeat a dogged and determined Binos side 2-0 with Martin playing the full ninety minutes.

He had one season with John Lambie’s Partick Thistle before heading back to the Juniors where he served Lanark United, Stonehouse Violet, Shotts Bon Accord and finally Cambuslang Rangers.