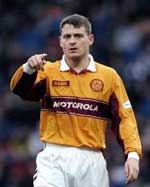 Billy Davies signed Tony Thomas from Everton for a fee of £150,000. When Tony came to Motherwell the club had already invested in some well known talent in the shape of Ged Brannan, Shaun Teale, Pat Nevin and his former team mate John Spencer as John Boyle had set in motion his plans to make Motherwell the third force in Scottish football.

The Liverpudlian made his debut for the club on the 16th December 1998 as the side played Dundee at Fir Park in which they carved out a fine 2-1 win.

However, he failed to settle in at the club and injuries started to hamper his progress. Sadly for Tony he picked up a knee injury and he was forced to retire when he was only 30 years old. Davies had stuck by him for a long time, but Thomas decided to call it a day, his last outing for the Steelmen was the 5-6 defeat at the hands of Aberdeen. Perhaps his best moment for the club was scoring in a Scottish Cup tie which helped dispatch a talented Hearts side from the competition.