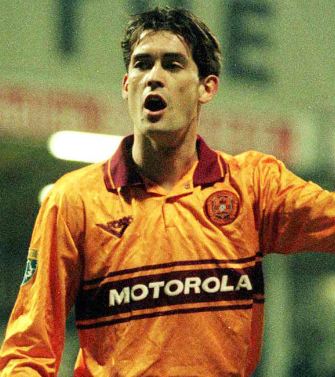 Born in Aberdeen on the 5th April 1966, it was with his hometown club that Willie Falconer would begin his footballing career under the tutelage of Alex Ferguson. At Pittodrie he was more or less a squad player, he played enough games to secure a Premier League medal at the end of the 1984/85 season. Willie also scored late goal in the entertaining 1987 Scottish League Cup Final against Rangers which looked like the winner, but the Govan side equalised with minutes remaining and won the trophy on spot kicks.

While at Aberdeen, Falconer was a team mate of defender Alex McLeish, this of course would have a bearing on his move to Lanarkshire later in his career. From Pittodrie, Willie would play for an array of English clubs over the next few years including Watford, Middlesbrough and Sheffield United. Perhaps the highlight of his stay down south was winning promotion with Boro which meant that they entered the inaugural Premier League.

Willie returned to Scotland in 1994 when Celtic paid Sheffield United £350,000 for his services, he became somewhat of an instant cult hero at Parkhead due in part to the bank refusing to pay the first instalment of the transfer, the club had been in turmoil for a while and the fans had been protesting against the board and wanted change, this transfer of course triggered it as a number of Directors subsequently resigned when the bank refused the funds. In 1994 he was part of the Celtic team that was beaten by Raith Rovers in the League Cup Final, he would enjoy some silverware as he played his part in the 1995 Scottish Cup victory over Airdrieonians. As Celtic finally got new investment players such as Andreas Thom and Pierre Van Hooijdonk arrived which pushed Willie down the pecking order and he essentially became a utility player.

It was no secret that Motherwell manager Alex McLeish wanted to sign Falconer, on Tuesday 16th January 1996 he finally got his man as the club paid around £200,000 to secure his services. The side had struggled from a real lack of firepower as from late October until the arrival of Willie it was only a couple of goals from Alex Burns that had been scored as the side had went on a poor run. As the side were in a serious fight against relegation from the Premier League, he added the necessary experience and firepower which galvanised the squad going forward. Funnily enough, on the day Willie joined the club he would make his debut as they were in action against Kilmarnock at Rugby Park, its perhaps a debut worth forgetting as he missed a penalty as Killie went onto secure the three points, certainly not the impression you would want to make.

Thankfully the signing would come good, he netted his first goal for the club in a 3-2 defeat against Rangers but in the coming weeks he scored the winners against both Raith Rovers then Kilmarnock which helped the club go on an unbeaten streak which propelled them towards safety. Despite having only joined the club half way through the season, Willie would finish the club’s top goal scorer with five strikes.

Signed as a forward, he could easily be deployed in a midfield role or elsewhere when required, his time with Motherwell was spent fighting relegation battles. Goals wouldn’t come as freely as he would have hoped but an equaliser against Celtic and then a 87th minute winner against Rangers which put a massive dent in their ten in a row title aspirations certainly helped in making him a favourite with the support.

When new manager Harri Kampman arrived, he cleared the decks massively in regards to the playing squad and Falconer was one of many experienced players to depart over the summer of 1998. Along with Eric Garcin, Tommy Coyne and Shaun McSkimming who had also departed Fir Park, the quartet joined newly promoted Dundee.

Willie was perhaps one player the club should have retained as not only did he play a pivotal role in helping the Dee’s maintain their league status but he became a nuisance when he played against ‘Well as he managed to get on the scoresheet on a number of occasions. During the 1999/00 season he enjoyed a purple patch as he scored an impressive 16 goals, followed by winning the Supporter’s Player of the Year award in 2000.

As his career fizzled out he had spells with Clydebank, St Johnstone, Grimsby Town and Clyde. He would return to Motherwell later in his career but this time as a youth coach.