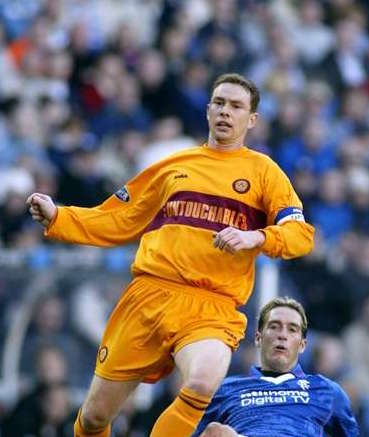 Derek Adams was signed by Harri Kampman from 3rd Division side Ross County for a fee of around £150,000. Derek had been a prolific goal scorer with County before the move.

Derek was essentially in and out of the side as Motherwell were not short of options during the 1998/99 season, on board were John Spencer, Don Goodman, Stevie Nicholas and attacking midfielders Derek Townsley and Kevin Twaddle. Derek scored on his home debut against Celtic, however the Steelmen were sadly beaten 2-1. In October 1999, he was loaned out to Ayr United. When he returned to Motherwell, he was used as a midfielder. Nearing the end of season 2001/02 Motherwell went into interim administration where 19 players lost their jobs, Derek survived the cull as he accepted a pay cut to remain with the club. He would of course benefit because as he would become a regular started for the first team.

In season 2002/03, Derek played 38 games and also netted five times that campaign, including a fantastic free kick in a League Cup game against Aberdeen. He also scored in the 4-3 Scottish Cup semi-final defeat to Rangers in April 2003. Prior to joining Motherwell, Derek served Aberdeen, Burnley and Ross County. The 2003/04 campaign started pretty much as last for Derek as he would miss the opening games through suspension. His presence was indeed missed as the games he missed seen two straight defeats and the season looked as if it was going to be a really bleak one, but that wasn’t to be as the side went onto a great run beating the likes of Hibernian at Easter Road and Dundee United at Tannadice.

In January, skipper Scott Leitch would have to sit out the rest of the season through injury so manager Terry Butcher gave Adams the captaincy. He featured in 35 games and scored 9 goals as a much improved ‘Well side finished in the top six. Before the season was out, both Derek and Steven Craig agreed pre-contract deals with SPL rivals Aberdeen towards the end of the campaign, so it was an obvious blow as he provided us with some vital goals and some much needed experience in midfield.

He would later go on to manage Ross County taking them all the way to the Scottish Cup Final in 2010 beating Celtic on route. He also would win the 1st Division title with the staggies and have an impressive debut season in the SPL as he achieved a top six finish and came close to winning a European place. It was of course Motherwell who denied them of this on the penultimate game of the 2012/13 season. Despite all the hard work he put in during his tenure at Dingwall he was ultimately sacked early in the 2014/15 season after a poor start. Derek would later manage English League Two side Plymouth Argyle signing many former County players where he would enjoy some success by nearly guiding them to promotion in his first season.